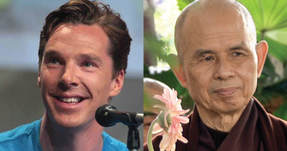 THE FEATURE DOCUMENTARY FILM ‘WALK WITH ME’, the cinematic journey into the world of mindfulness with Zen Buddhist master Thich Nhat Hanh, is playing at the AMC Waterfront IMAX on October 25, 2017.  The Premier screening, on September 12th, was sold out and much appreciated  by the 150 in attendance.  The film is brought to Pittsburgh by Laughing Rivers Sangha and the Buddhist Society of Pittsburgh using a new crowd-sourcing platform called Theatrical-On-Demand®. Theatrical-On-Demand® allows movie-goers to bring the movies they want to watch to their nearby local theater with no rental cost and no risk.

Since this is a private screening you can ONLY get your tickets online and in advance (and not at the theater). Reserve your tickets at the link below. Let's turn this event into a meditation hall! Special event screening tickets and schedule are available now by clicking here - http://gathr.us/screening/21314
​
WALK WITH ME, narrated by Oscar-winner Benedict Cumberbatch, goes deep inside a Zen Buddhist community who have given up all their possessions and signed up to a life of chastity for one common purpose – to transform their suffering, and practice the art of mindfulness with the world-famous teacher Thich Nhat Hanh.  Filmed over three years, in their monastery in rural France and on the road in the USA, this visceral film is a meditation on a community grappling with existential questions and the everyday routine of monastic life.

The essence and message of this film is about true happiness, founded in mindful practice, community and service. It speaks to our times, and to the possibility of finding joy amidst constant change in our own busy lives.  Local, ordained members of Thich Nhat Hanh’s Order of Interbeing will introduce the film, inviting everyone to come present into the moment and into the energy of the film. They and other local Buddhists and Mindfulness leaders from the Buddhist Society of Pittsburgh  will also answer questions following the film.