A brief history of Buddhism 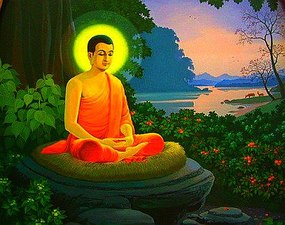 Siddartha Gautama, the Buddha Shakyamuni, lived and taught about 2,500 years ago in the southern foothills of the Himalayas. His philosophical discoveries and teachings have resounded down through the centuries, traveling from teacher to student across continents and oceans to reach us today.

Like a pebble dropped in a calm pond, Buddha's impact traveled like ripples from Northern India. It spread from that center, following the highest ways and byways of the times, influencing philosophical thinkers on its way. As they spread, Buddha's teachings (Dharma) became incorporated into the cultures with which they came in contact, creating a rich diversity of practice.

From Northern India, the teachings traveled south and east along the coast and across the Indian Ocean.  The Theravada communities and monastic forest retreats emerged in Southern India, Sri Lanka and the Southeast Asian peninsula of Myanmar (Burma), Thailand, Cambodia, and Vietnam. This tradition of Buddhism was firmly anchored in the Pali Cannon, the earliest written Buddhist records, and it i from here that Vipsassana (Insight Meditation) has grown and flourished.

Buddhist teachers also traveled west to current Afghanistan and into Central Asia, flowing north, trade caravans,  and establishing centers along the Silk Road. It was in this early era that the concept of Prajnaparamita (wisdom of non-duality and compassion) emerged as the basis of the Mahayana tradition.

Buddhism reached China around the time of Jesus.  As the Dharma took hold, inspired pilgrims traveled to India (no small undertaking) to clarify understandings for future practitioners. Pure Land practices emerged in the 2nd century CE, and in the 5th century CE the Indian dage Bodhidharma "arrived from the west".  His extraordinary practice informed the early Ch'an traditions, the common root of all Zen schools.

From China, the Mahayana teachings flowed northeast to Korea and Japan, and south to Vietnam. Though linked philosophically, these branching streams of Zen have unique ways of teaching and practicing; for example, koans are conundrums for the mind that are used in some Japanese and Korean traditions. Some Zen schools such as Soto Zen practice zazen (just sitting), and Vietnamese Zen commonly practice walking meditation.

Well-buffered by the Himalayas, the Tibetan people received the Buddha's teachings during the 6-8th centuries CE. Building upon the Mahayana traditions, Valrayana or Tantric lineages became well-rooted in Tibetan schools; Bon, Kagyu, Nyingma, Sakya and Geluk are examples.  Many great Tibetan masters have shared their practices with contemporaries, a non-sectarian movement known as Rimay, while the Shambala community, whose origins are deeply Tibetan, carries a distinctly Western flavor and approach.

We are fortunate to have a wide representation of Buddhist traditions in Pittsburgh where the Three Rivers meet. It is here  where we gather annually to celebrate Vesak, in honor of the Buddha, in deep appreciation and peaceful community.

May everyone be happy and well!
​